The Christ is Dead, Long Live the Christ: A Philotheologic Prayer, a Hermeneutics of Healing


Book abstract/summary:
The Christ is Dead, Long Live the Christ: A Philotheologic Prayer, a Hermeneutics of Healing is a call for renewal and reinvention. Following a brief examination of the historical Jesus (Yeshua, using his actual Aramaic/Hebrew name), the book moves into a phenomenological study of the image, idea, and the place of both in our felt experiences. Looking closer at what we think were the actual words of this wandering sage, the picture we arrive at is one that will surprise, possibly unsettle. Moved out of our traditional comfort zones, we find the need to question what we have been told were Yeshua’s teachings, compelling us to further re-think messages on the afterlife, human finitude, so-called atonement theologies, and above all the “kingdom of God.” Whatever this vision was – and might yet be – it seems central to Yeshua’s efforts, and so we finally weigh these “kingdom” facets against a broader ideascape, offering suggestions for how a Yeshuan “kingdom” project situated within the panoply of a widely comprehended Judaic way-of-being might yield fresh life to we who find worth in the utterances and what they point towards, to we who wonder about a more human(e) world.

Find the book on Amazon

This is a new book from Andrew Oberg, associate professor in the Faculty of Humanities at the University of Kochi, Japan. Posted on 01 August 2022 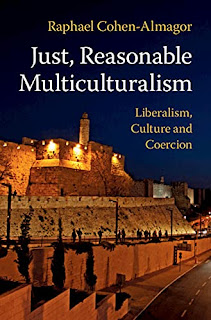 In Just, Reasonable Multiculturalism, Cohen-Almagor develops a comprehensive theory that tackles three major attacks on multiculturalism: that it is bad for democracy, that it is bad for women, and that it promotes terrorism, aiming to show that liberalism and multiculturalism are reconcilable. Cohen-Almagor outlines the theoretical assumptions underlying a liberal response to threats posed by cultural or religious groups whose norms entail different measures of harm. He examines the importance of cultural, ethnic, national, religious, and ideological norms and beliefs, and what part they play in requiring us to tolerate others out of respect. Cohen-Almagor formulates guidelines designed to prescribe boundaries to cultural practices and to safeguard the rights of individuals and then applies them to real life situations. Painstakingly, Cohen-Almagor balances group rights against individual rights and delineates the limits of state intervention in minority groups’ affairs in cases involving physical harm and non-physical harm. The first category includes practices such as scarring, suttee, murder for family honour, Female Genital Mutilation (FGM), female circumcision and male circumcision. The second category includes arranged and forced marriages, divorce and property rights, gender segregation, denial of education, and enforcement of a strict dress code. Two country case studies, France and Israel, illustrate the power of security considerations in restricting claims for multiculturalism


Find the book on Amazon
Watch the book launch on YouTube

This is a new book from Raphael Cohen-Almagor, director of the Middle East Study Group, School of Politics and International Studies at the University of Hull, UK. Posted on 18 November 2021


Article abstract/summary:
Michelangelo Merisi da Caravaggio (1571-1610) was an Italian painter who became an artistic pioneer for both his portrayal of the models he used and for the new lighting effects he helped to inaugurate. Many of his works were based on biblical narratives, and were produced at the behest of a cardinal or other Church dignitary during his long period of stay in Rome prior to his life ending in exile, a fugitive from charges of assault and even murder stemming from what was essentially a street brawl. Amongst these religiously themed paintings is the title “Martha and Mary Magdalene” (1597-1598), which will form our central concern in the below. We shall seek to examine this portraiture in a double-barreled phenomenological analysis: firstly through the lens of knowing the characters depicted and what they are meant to be doing, and then secondly via a perspective absent background knowledge (an attempted full bracketing). Through comparing the results of these two approaches it is hoped that the image will be allowed to speak its own voice, and in this we may also find ourselves asserting much that might otherwise have remained hidden.

This is an Author's Accepted Manuscript of an article to be published in the journal Bulletin of the University of Kochi. Full publication information forthcoming. Posted on 07 September 2021 by Andrew Oberg


Being and Time-less Faith: Juxtaposing Heideggerian Anxiety and Religious Experience


Article abstract/summary:
In Heidegger, fear reveals the thing to be feared in a fuller way than theory can. However, anxiety is distinct from fear, for while fear is directed towards a specific thing within the world, anxiety is anxious about existence itself, disclosing the totality of Being. A similar method could be applied to faith. Arguably, faith is a mood; a feeling of trust in the divine that can be phenomenologically consistent and overwhelming. However, faith is not necessarily directed towards a specific object within the world. One cannot point and say: “God is right there!” Indeed, attempts to do so through miracles, teleology or dialectics have been roundly critiqued by the Western tradition. But then what is this mood of faith disclosing if not something within the world? Perhaps, like anxiety, faith is not revealing an object within the world, but the world as a totality. Since God—at least the God central to much of the Judeo-Christian tradition—is not a being but Being itself (or in some formulations is actually ‘beyond being’), God therefore cannot be disclosed in the world as an object but has to be disclosed as that which is transcendently beyond it. Such a conclusion does not simply flee the realm of the everyday, but derives from, and legitimates, basic descriptions of religious experience. Specifically, Judeo-Christian descriptions of (1) divine providence, (2) happiness/ joy, (3) the eschatological ‘not yet’, and (4) Divine Hiddenness. This paper will argue that appropriating Heidegger’s phenomenological method in his discussions of fear/anxiety and applying them to Judeo-Christian descriptions of faith thus leads to a radically different ontology from that of Heidegger himself, offering a renewed basis for religion that contrasts the nothingness revealed by anxiety with the divinity revealed by faith, challenging us to weigh for ourselves which mood is more swaying.


Download the PDF: Being and Time-less Faith: Juxtaposing Heideggerian Anxiety and Religious Experience by Jonathan Lyonhart

This is an Author's Accepted Manuscript of an article originally published in the journal Open Theology 6:1 (2020), 15-26. Posted on 12 January 2021 by Jonathan Lyonhart